The Nigerian National Petroleum Corporation (NNPC) has signed an agreement with Nigeria Agip Oil Company (NAOC) and Oando for the transfer of its stake in four oil wells to the Nigerian Petroleum Development Company (NPDC), its upstream arm. 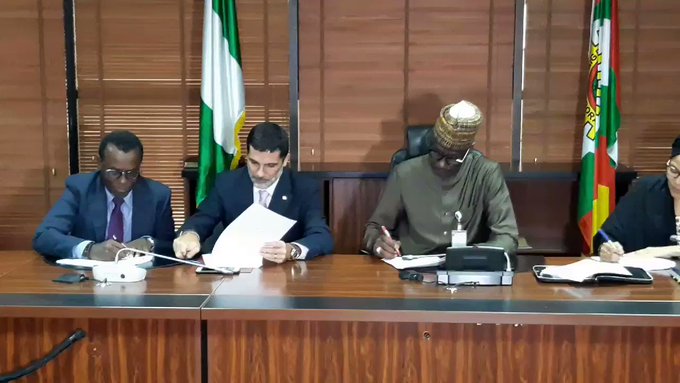 This significant milestone is geared towards meeting @NNPCgroup‘s target of growing the national reserve to 40  billion barrels and improving crude oil production to three million barrels per day by 2023, in line with Federal Government’s aspirations.

29 people are talking about this

Why this matters: The essence of the transfer is to grow Nigeria’s crude oil reserve to 40 billion barrels (bbl) as well as improve crude oil production to three million barrels per day (mbpd) by 2023, according to the corporation.

Before the agreement could be reached, Mele Kyari said that the NNPC reached out to President Muhammadu Buhari, who is also the Petroleum Minister for approval. It was after Buhari agreed that all the parties involved signed a novation agreement to officially transfer all the rights and obligations held by NNPC to the NPDC.

“The federation divested its interests in the NAOC, NNPC joint venture and that means we transfer those interests to NPDC. The meaning of that is to grow NPDC to become a medium-sized upstream company that the federation and the NNPC will be proud of,” the NNPC boss said.

The agreement had its own challenges as a disagreement ensued amongst the parties but Kyari assured them that NPDC would deliver.

“We had issues that we could not resolve, that prevented the transfer of those novations; principally, the lack of assurance that NNPC could not deliver to our partners to convince them NPDC will deliver to its responsibilities.

“We have given them all the comfort and condition precedent for them to be convinced that NPDC would deliver. That is why our partners, NAOC and Oando have agreed to sign the novation agreement which will open a new chapter of business for NPDC,” Kyari stated.

What you should know: Nigerian Agip Oil Company Limited operates in the Niger Delta, under a joint venture arrangement with NNPC (60%), NAOC (20%), and Oando (20%).