China warns Hong Kong protesters not to ‘play with fire’

China has issued a strong warning to Hong Kong’s protesters, saying their attempts “to play with fire will only backfire”.

A spokesman for China’s top policy office on Hong Kong told protesters not to “underestimate the firm resolve [of] the central government”.

On Monday, a call for a general strike caused severe disruption, and more than 200 flights were cancelled.

Protesters want an independent inquiry into alleged police brutality, the complete withdrawal of a controversial extradition bill, and the resignation of Hong Kong’s leader Carrie Lam.

The demonstrations have frequently ended in violent clashes with police. They are seen as a challenge to Beijing’s authority in the territory – and a reflection of how many Hong Kongers fear that their freedoms are being eroded.

The former British colony is part of China but enjoys unique freedoms not seen on the mainland.

What did China say, and why is it significant?

The “radical demonstrations” have pushed Hong Kong “to the verge of a very dangerous situation”, said Yang Guang, a spokesman for the Hong Kong and Macau Affairs Office (HKMAO).

He warned the protesters not to “mistake restraint for weakness”.

Attempts to force Ms Lam to resign “will lead nowhere”, he said, adding that the protests had had a “serious impact” on Hong Kong’s economy.

It is one of the strongest warnings Beijing has issued over the protests so far. The HKMAO rarely holds news conferences on Hong Kong – but this is its second briefing in two weeks.

Mr Yang said that “radical and violent” forces were at the forefront of the protests, while “some misled but well intentioned” citizens were caught in the middle.

He accused Western “anti-China forces” and “meddling hands behind the scene” of instigating unrest.

As examples, he cited US House Speaker Nancy Pelosi who called the protests “a beautiful sight to behold”, and the UK’s then-foreign secretary Jeremy Hunt who urged an investigation into the use of force by Hong Kong police.

However, a pro-democracy politician, Lam Cheuk-ting, told the BBC there were no “external forces” behind the protests.

“It is not a movement organised by any overseas government but the Hong Kong people voluntarily,” he said.

Could the military get involved?

While China’s People’s Liberation Army (PLA) has troops stationed in Hong Kong, they are not expected to interfere in local issues – although the law does permit Hong Kong’s government to request their assistance for maintaining public order, or disaster relief.

During the news conference, Mr Yang was asked whether the Chinese military could get involved – but said Beijing was confident that Hong Kong police could restore order.

What are the protests about?

The rallies began with fears over a proposed bill that would allow suspected criminals to be sent to mainland China to face trial.

Critics said it would undermine Hong Kong’s judicial independence and could be used to target those who spoke out against the Chinese government.

The row intensified as police were accused of using excessive force on protesters.

Though the bill has now been suspended, demonstrators want it fully withdrawn – and have also been expressing their anger at the police, and demanding an amnesty for protesters accused of rioting. 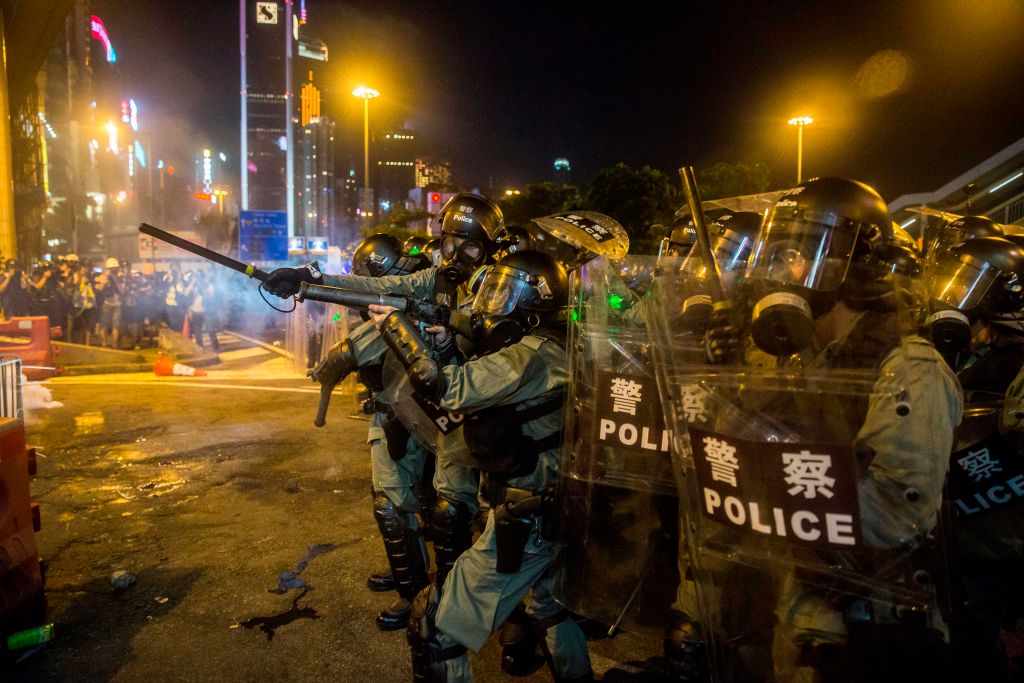 How Hong Kong police have responded to protests

The protesters have become more confrontational in recent weeks, with demonstrators arguing that the government has not responded to peaceful rallies.

A city-wide strike on Monday crippled transport services and brought the city to a standstill.

About 250 flights were cancelled as airport and airline staff joined the strike.

In one district with a reputation for pro-Beijing sympathies, men wielding long poles clashed with demonstrators before falling back.

Police said 148 people, aged between 13 and 63, were arrested during Monday’s protests.

On Monday, Ms Lam gave her first media address in two weeks, warned that Hong Kong was “on the verge of a very dangerous situation”.

She also accused activists of using the extradition bill as a cover for their real goal, which was to “destroy Hong Kong”.